Father’s Day is just a week away and my Fancy Fire Pit business is booming! I would like to think it is because I have such a great product and it has (finally!) been discovered. But given the timing and the fact that nearly all my sales are for very lucky Dads, I think it has more to do with men and fire. I collect old cookbooks and in one Life cookbook from the early sixties, in a section about grilling, it says “grilling is a man’s job.”. The implication, clearly enough, is that while grilling might be a man’s job, the rest of the kitchen is a woman’s. I am embarrassed to admit that even though I am an accomplished cook, I rarely throw the meat (or vegetables or pizza) on the grill. It is, as it was in the 60’s, my man’s job. 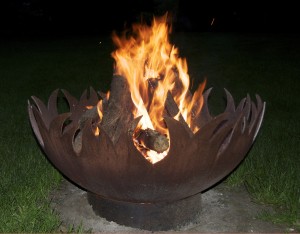 So what is it that draws men to fire. Trust me, I am not complaining, with my sales growing, but I don’t fully understand the phenomenon. It must be some atavistic instinct drawing men back to the days when they hunted the meat and then, naturally, had to be able to cook it. While my husband takes care of the grilling in my family, my son has also developed a love of fire and spends nearly every night in the summer around the fire pit with his friends. They say they are roasting marshmallows…

So here is to the man in your life, be it your husband, father or son. Light a fire, let him cook up a steak on the grill and eat it in front of your fire pit, a Fancy Fire Pit!

Get Blog Posts To Your Inbox: